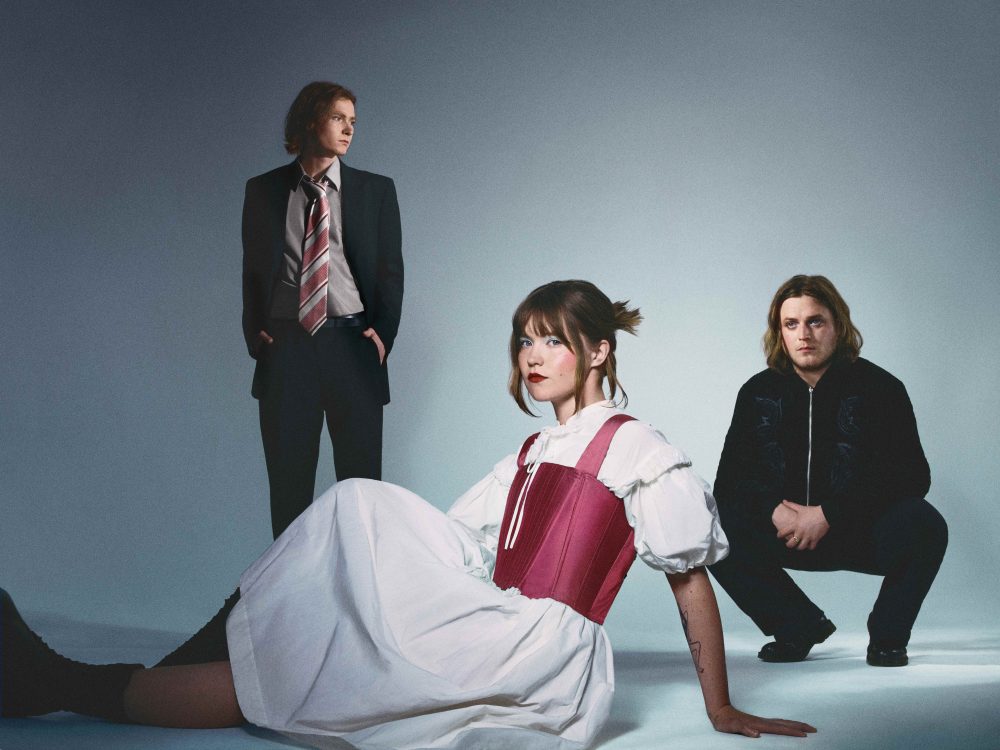 South London band PVA’s stunning debut album BLUSH consolidates the beating pulse of electronic music with the raw energy of a life-affirming gig and reveals more about the trio than they’ve ever previously shared.

The eleven blistering tracks from the group, Ella Harris and Josh Baxter (who share lead vocals as well as handling synths, guitars and production) alongside drummer and percussionist Louis Satchell, are made from a formula of acid, disco, blistering synths, the release of the dancefloor and queer-coded sprechgesang post-punk.
They established themselves as key players in south London’s fervent indie scene alongside Squid, black midi and Black Country, New Road, advancing to slots at SXSW, Pitchfork Music Festival and Green Man, and national tours with Shame, Dry Cleaning and Goat Girl. Even in their earliest iterations, however, their existence beyond the confines of a traditional band set-up were clear. It wasn’t unusual to be able to catch them twice in one night, once at Brixton sweatbox The Windmill and again in the early hours DJing at Deptford’s subterranean Bunker club.
On their debut album PVA carry that same energy from the live circuit, while also building out a holistic world full of texture and heart. BLUSH is rich with industrial-sized beats that pack a heavyweight punch, jagged punk spirit, and moments of hushed contemplation from Harris’ poetic lyrics. It sprints tirelessly throughout, niimbly linking influences including Portishead, PC Music, Laurie Anderson, and cult rave-pop duo The Pom-Poms. This is the sound of a group pushing past expectations and delivering an album that opens up new worlds of possibility.

BLUSH was written during various lockdowns, a testing time for a band used to finding the limits of their sound live on stage. Adversity, clearly, doesn’t get the better of PVA, though. If anything, they feel some enforced distance strengthened their songwriting. Ella wrote poems and learned to produce music, Josh worked with other artists as a producer, and Louis continued his music course at City University, studying ancient African polyrhythms among other techniques. “We’d got apart from one another with what we were making and had to come back together,” Ella explains. “We could have just bashed the album out but I’m really happy we took our time with it. It feels a lot more us.”