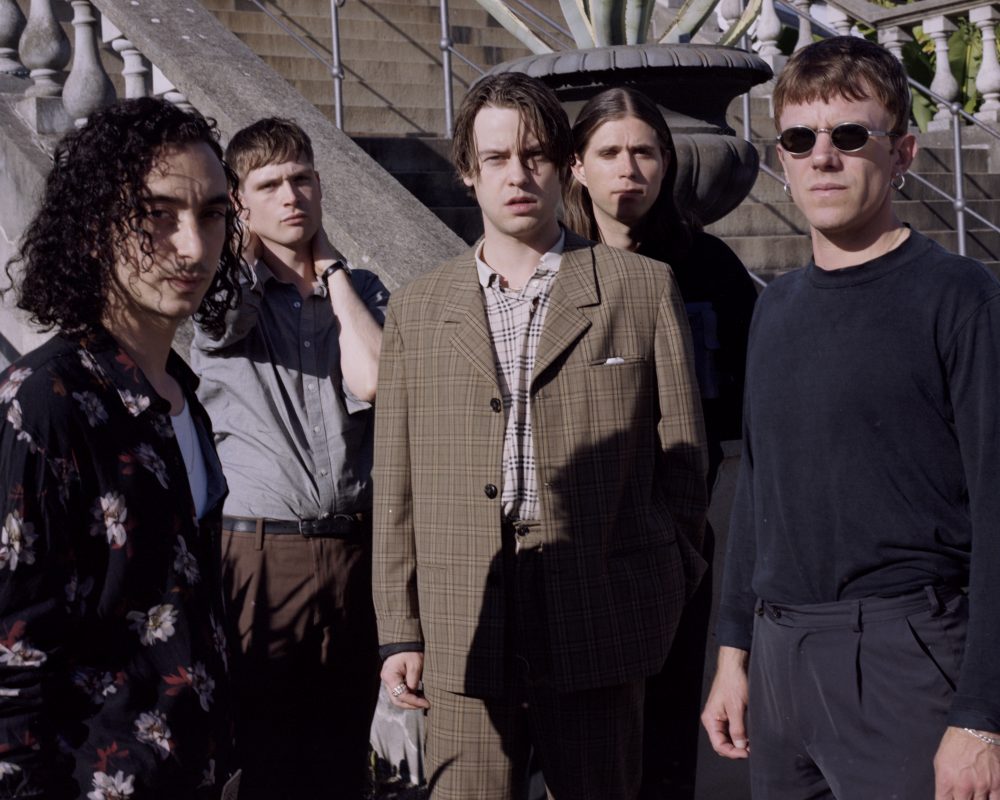 “Shake The Feeling” is open to interpretation. The phrase can refer to the Rock ‘n’ Roll clarion
call of “shaking of some action.” Or it can be taken as a callback to the even more primal urge to
“shake what your mama gave you.” Ultimately, the phrase can be seen as an expression of
existentialism; an acknowledgement of our consigned inability to be free of the human condition.
It’s the latter interpretation, the usage that–while ostensibly romantic–implies something
inescapable, that Iceage are using for the title of their new record. As with everything Iceage
does, it’s a come-on delivered as a threat, a sexy invitation to get irretrievably lost.

While not as anachronistic as a B-sides album, an outtakes compilation is something older,
classic rock bands, like Deep Purple or Pavement, have. Nobody saw this for Iceage. Hell,
nobody saw Iceage surviving their first US tour, let alone living long enough as a band to have
songs they actually left off of records. But Iceage haven’t just survived – they managed to get
better, so much so that even their wretched castoffs shine in god’s light like golden teeth from a
pirate’s sun bleached skull. Even as teens, the spirit was indeed in them, and it was a spirit of
both epistemological violence and euphoric grace. When lead singer Elias Bender Rønnenfelt
looked dead-eyed and stalwart out across those crowds and sang the chorus of “Total Drench,”
he was speaking both truth and prophecy.

As with all of Iceage’s albums, whether it be the sensual daring-do of their dark-hardcore
masterpiece debut, the Flying Nun-dappled “Oi!!!!” of You’re Nothing, the shift to cowpunk gothic
romanticism on Plowing Into the Field of Love, or the space truckin’ gospel-rock of their most
recent albums, Elias Bender Rønnenfelt, Johan Suurballe Wieth, Jakob Tvilling Pless and Dan
Kjær Nielsen make the impossible seem effortless. Shake The Feeling: Outtakes &amp; Rarities
2015-2021, the band’s second full length for Mexican Summer, is a collection of non-LP cuts (or
“misfit children,” as Elias describes them) from the seven years during which Iceage made
Plowing Into the Field of Love (2014), Beyondless (2018), and Seek Shelter (2021).

Why does any band leave a song off a record? Some, like “All The Junk On The Outskirts,”
were enjoyed by the band but “didn&#39;t fit the framework” of the album they were working on at the
time (Beyondless). Others, like the compilation’s title track, may have seemed “lacking in intent”
or too “happy go lucky” at the time of their recording but, in retrospect, are correctly seen as
being the opposite of what ruled them out. The burly guitars of ‘Shake The Feeling’ are almost
entirely intent; the lyrics, as carried by Elias’ breathless need and Dan’s tumbling dice drum fills,
are only “happy go lucky” if your favorite part of going out at night is going home, texts
unanswered, with your heart on. And finally, raucous, pre-post punk bruiser ‘I’m Ready To Make
a Baby’ was indeed recorded but never included on an album due to the song’s initial impulse to
(according to Elias) be “so dumb I have to act on it,” but “we couldn’t in our right mind put it on
an album.”

True to Iceage’s confounding instincts, the songs of Shake The Feeling, rather than being in
chronological order, are presented in the order that makes most sense to them. The album
begins with the aforementioned “All The Junk On The Outskirts,” a track Iceage built around a
drum machine (a process that, despite it being what Elias calls a “daunting breach of formula,”
resulted in a slithering and serpentine bad boy of a song that they all quite liked). The album
proceeds to jump forward and backwards in time, with tracks written in the four years between
Plowing Into The Field of Love and Beyondless colliding into tracks like “Order Meets Demand”
that were considered “slightly [too] epic to find a breathing space” on 2021’s Seek Shelter, as
well as covers of two 1960s songs (“I’ll Keep It With Mine” by Bob Dylan and Abner Jay’s “My
Mule”) given their own distinctive spin.
The album culminates with a pairing of “Lockdown Blues” and “Shelter Song.” “Lockdown
Blues,” being the song released at the beginning of the COVID-19 pandemic, is certainly of its
time (with even Elias calling it “a bit on-the-nose”) but also displays the desperate vigor of being
“written one night, rehearsed on the second, and recorded on the third,” at a time when the
band was unsure when they’d see each other again. The version of “Shelter Song” that ends the
album is an appropriately roots-signifying stripped down acoustic rendition of the track that–in
full string and choir-drenched glory–opened Seek Shelter. “Johan is playing some pretty flute on
it,” Elias says of Shake The Feeling’s closer. “I didn’t know he could play the flute. He’s a
surprising motherfucker, that Johan.”

As to whether Shake The Feeling has a dominant theme, Elias says: “not really, and then
somehow yes.” “No, but also yes” is as perfect an encapsulation of an Iceage-ian ethos as there
could ever be. More than just about any other band from Europe working within American Rock
‘n’ Roll traditions, Iceage maintain their initial embracement of the no-but-yes, life-affirming
negativity of punk and hardcore. Like Dante’s journey through Hell to get to heaven,
Baudelaire’s bridging of the profane, and a million Irish poets in between, Iceage understands
that “we are all in the gutter, but some of us are looking at the stars” was always a two-way
street. Stars are admittedly lovely, but the gutter has some cool attributes as well.

Shake the Feeling is a collection of misfit toys, by and for misfit toys. Maybe Elias considers it
more a document of the band at different points of the members’ young lives than a “piece of
artwork.” Maybe he’s right and maybe the fact that the songs “seem like they can get along” is
enough. Getting along was good enough for The Libertines and Chet Baker, so why not Iceage?
But, conversely, maybe the songs on Shake the Feeling work together as well as any band of
outsiders, huddling alone together in the world’s dark. Maybe none of these tracks were the
exact right fit for either the gutter or the stars, but like Iceage (or, for that matter, any human
condition survivors when the spirit is in us), they slosh about in the moon-lit muck like they
consider themselves wild and alive, and they can’t shake the feeling that they’re lucky and strange just to be anywhere at all.