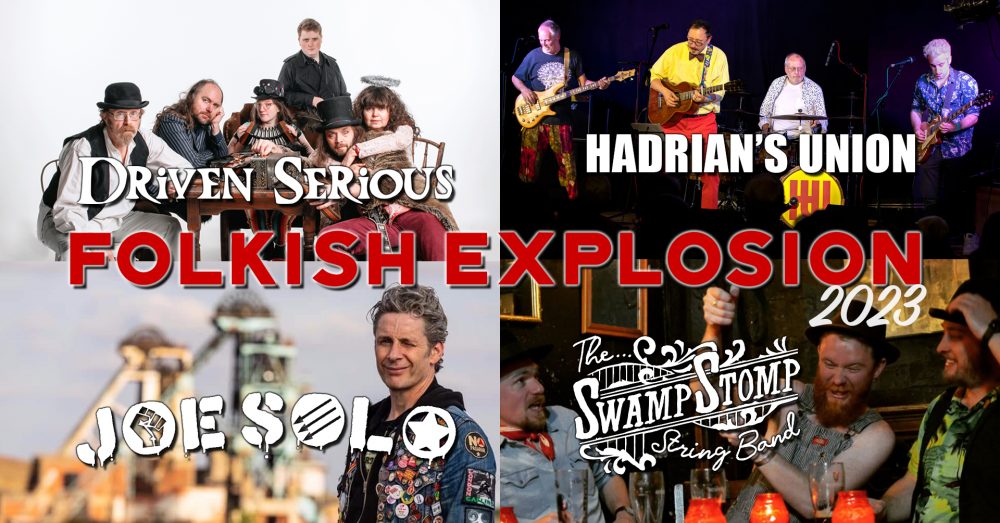 Driven Serious new album: “Look On These Works is an incredibly engaging listen, whether it’s the monumental sounding strings that carry us through this adventure, or the war-like drums at the start of the title track, it’s an impressive experience.” – Narc
Driven Serious performance: ” I suppose you could file Driven Serious under the banner of folk-rock; but they are so much than that. They have a vibrancy that you can virtually see thrumming off them when they play, passionate and with the hand-break well and truly off, and with a vibe that has had people likening them to The Levellers to The Pogues to The Smiths to The Wonderstuff”

Joe Solo is an award-winning musician, writer, poet, activist, broadcaster and washing machine engineer from Scarborough. His musical odyssey began in 1987 fronting a bash-em-out band at school, and has seen him play nine countries either as lynchpin of pop-punk upstarts Lithium Joe or hammering out his unique brand of Folk, Punk and Blues in his own right.

On top of releasing twenty one albums since 2004, Solo has written a series of children’s books for Unison on social justice and equality; runs a research project on the Hull Pals Battalions in the First World War; hosts a weekly Monday night radio show; has had one of his poems used in an international campaign to educate on dementia awareness; co-runs ‘May Day Festival of Solidarity‘ an annual event bringing together voices from music, poetry and politics to celebrate International Worker’s Day; and has still found time to open for the likes of Paul Heaton & Jacqui Abbott, Billy Bragg, Chris Wood, TV Smith, Louise Distras, David Rovics, Grace Petrie, Attila the Stockbroker, Otis Gibbs, Robb Johnson, Edgar Broughton, Naomi Bedford & Paul Simmonds, Emily Portman, Pete Wylie, and The Blockheads; whilst his songs have been played by John Peel on Radio One, Mike Harding on Radio Two and Tom Robinson on  BBC6Music

Hadrian’s Union – since the initial conception of the band the musical styles have continued to evolve. They are a predominantly a folk – rock band but their interests in many genres of music has led to experimentation with Ska, Jazz, Blues, Bluegrass and so much more.

The Swamp Stomp String Band are not just another hillbilly-wannabe, country band…sure, there are twangy banjos, driving guitars, a honky-tonk piano, and a thudding double bass
but these propel everything from drinking songs that will have the room stomping their feet and
raising their flagons of cider, to ballads that willbreak even the toughest of folk. Play your cards
right and you might even get invited for a waltz!