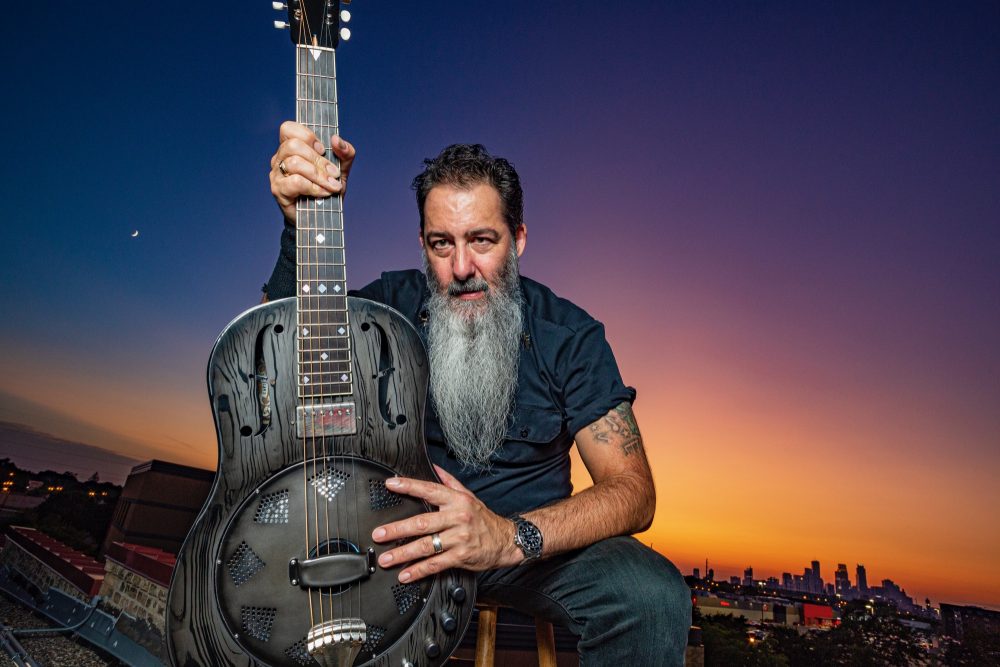 SLIDE guitarist & songwriter Dave Arcari’s alt.blues sounds owe as much to trash country, punk and rockabilly as they do pre-war Delta blues and have been showcased via ten internationally-acclaimed solo CD releases.

Arcari’s latest album – Live at Memorial Hall – recorded at a venue close to his home on the eastern shores of Loch Lomond, Scotland,  was released in late 2017 on Buzz Records. The double 180g coloured vinyl/digipak CD/download/streaming release is the definitive collection of Arcari’s material to date.

Since then, a series of single and EP releases during 2020’s covid lockdown summer – Stick to Your Guns, Nine Pound Hammer and The Acoustic Roots of Dave Arcari  – follow 2019’s topical Brexit Blues and the previous year’s banjo-driven Whisky Trail which showcased a mellower side of Arcari’s music.

Previously, the 2016 Hellbound Train EP entered the iTunes charts at number seven, filling a gap in releases since his previous (fifth)  album – Whisky in my Blood –  released on Finnish record label Blue North in March 2013. As well as showcasing Arcari’s trademark National steel guitars, the release features performances on banjo, regular guitar and and cigar box which help capture the full breadth of Arcari’s song-writing and performance.

The ultimate validation for Arcari’s music and performance came in 2019 when National Reso-Phonic Guitars launched the ‘Dave Arcari signature model’ guitar.  Arcari joins an elite and exclusive  group of players who have signature models and  is the first – and only – musician outside the USA to be honoured by the iconic instrument maker whose name is synonymous with the development of the blues genre.

While continuing to build his audience in the USA with once or twice-annual tours since 2013 – including official showcases at SxSW in Austin, Texas – Arcari maintains his presence on the UK and European touring and festival circuits.

A series of shows with folks including Steve Earle, Alabama 3, Seasick Steve, Toby Keith and Jon Spencer along with his relentless UK and European tour schedule have established Arcari as a formidable international solo performer who is fast building a media reputation as a ‘hell-raising National guitar madman’.

A former debt collector,  Arcari cut his musical teeth busking on the streets of Glasgow before forming his first band Summerfield Blues which won the Alexis Korner Memorial Trophy and accolade of Scottish Blues Band of the Year at Edinburgh International Blues Festival in1993.

He went on to form pioneering alt.blues trio Radiotones, releasing three studio albums between1998 and 2003 before embarking on a solo career.