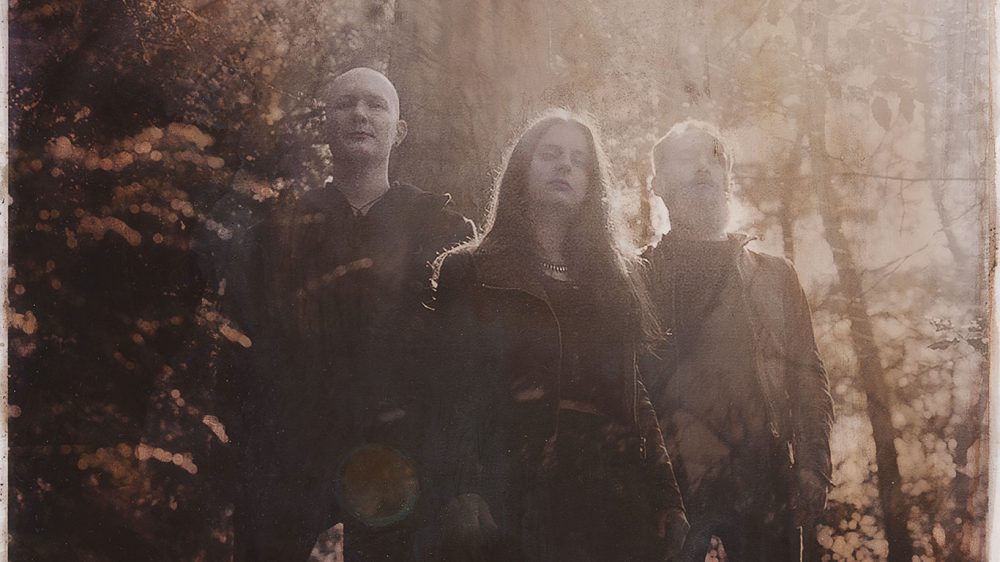 Cellar Darling are a heavy progressive folk rock band from Lucerne, Switzerland. The band formed in the summer of 2016 after Anna Murphy (vocals, hurdy-gurdy, multi instrumentalist), Merlin Sutter (drums) and Ivo Henzi (guitars and bass) left Swiss folk metallers ELUVEITIE, which they had all played in for over a decade. But they weren’t ready to end their musical journey together yet, and embarked on a new and different path.

“With Cellar Darling, we deliberately didn’t set ourselves any limits – and that really enabled us to find the type of music that we wanted to play,” the band explain.
What quickly developed was a unique and fresh combination of grand and heavy riffs, powerful drumming, and a unique voice, along with the signature earthy tones of the hurdy-gurdy, confidently fusing progressive metal & rock with elaborate lyrical tales.
In September 2016, following a summer of intense songwriting sessions, Cellar Darling self-released their first single “Challenge” along with the bonus track “Fire, Wind & Earth”, to overwhelmingly positive reactions from around the world. Signing to Nuclear Blast Records in January 2017 was swiftly followed by 3 single releases (“Black Moon”, “Avalanche”, “The Hermit”), all met with a staggering support from an ever growing fanbase. Cellar Darling’s debut album “This Is The Sound” was released on June 30th 2017 and entered the top 100 charts in Switzerland, Germany, and the UK. In support of “This Is The Sound”, Cellar Darling toured three continents and more than 20 countries.

Cellar Darling’s second full-length concept album “The Spell” was released on March 22nd 2018, and it cemented the band firmly in the progressive music world. This ambitious release weaves a dark fairytale for the modern era, told through heavy yet intricate, progressive metal, enchanting visual art and utterly immersive storytelling. With this album, the trio decided to take their musical ideas and creativity a step further, and to create a concept album. It tells the tale of a girl who is birthed into a world full of pain, damaged and debilitated by the human beings that inhabit it. We follow her as she meets death and falls in love with him, trying desperately to join him – concluding with an ambiguous ending that leaves the listener wondering.

On “The Spell” Cellar Darling have expanded their prog sound. Juxtaposing darkness and light, the album soars with melody, pummels with heavy passages and is peppered throughout with progressive flourishes, folky interludes and classical elements, as well as their use of hurdy gurdy and flute.

“I think prog fits us best,” Merlin says. “Prog isn’t just about guitar solos, long songs or technical ability: for me, it’s pushing the limits of genre. We don’t want to set any boundaries for ourselves, and to me, that is the definition of progressive music.”

But the ambition of “The Spell” doesn’t stop with the music and lyrics: Cellar Darling have created an audiobook that’s narrated by Anna to help complement the album’s story, and they enlisted Romanian graphic designer, Costin Chioreanu to create vivid illustrations and animated videos for every track. In September 2019 Cellar Darling won a Prog Award for Best Video of 2019 with “Insomnia”.

The first part of a world tour for “The Spell” again saw the trio perform all over the world, including headline tours in the U.K., Latin America, and Europe in 2019.
In early 2020, the COVID-19 pandemic interrupted Cellar Darling’s ongoing tour, resulting in the cancellation of more than 80 shows in Europe and North America. Following two live stream performances, in April and June of 2020, Cellar Darling retreated for the remainder of the year in order to write and record a new single. The 10-minute prog epic “DANCE” was released on 8 January 2021, followed by a music video on 23 March.

Returning to the stage for just two shows in the fall of 2021, Cellar Darling are currently working on new music and are set to play only select live performances in 2022.