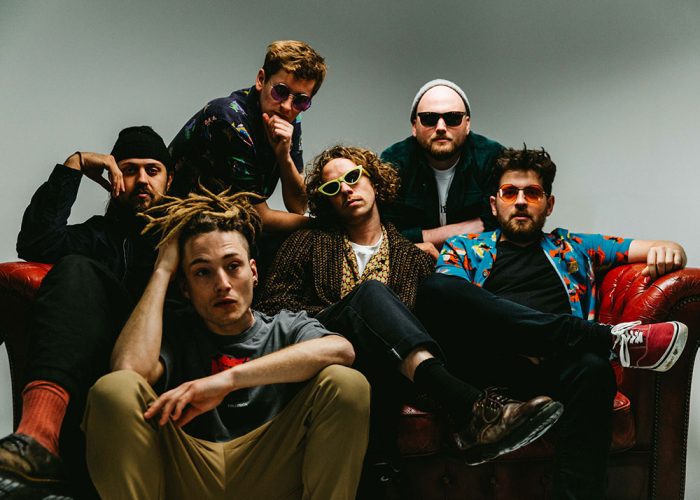 Bare Jams have a rotating cast of characters in their long musical backstory. Starting out in 2011 with the aim of breaking their serial festival fence-jumping habit, schoolmates Ollie and Sam hunkered down in Sam’s garden shed, later known as the Bare Jams cave, to jam and write original music which they performed as an energetic acoustic duo. After recruiting D-Slice on bass the band began to evolve into to a flamboyant, high energy ever-changing collective finally settling on their current line up in 2018 – a sonically tight, six-strong tour-de-force of experienced musical alchemists seamlessly cooking up a credible fusion of musical styles –
pop, soul, reggae, and rock – a sound that is uniquely their own.

The band are well travelled, with an enviable tour history over the years: headlining their own shows across Europe as well as supporting legendary acts such as The Wailers, Katchafire and La Pegatina. Add to this their appearances at the biggest festivals in the UK and Europe: Glastonbury, Boomtown Fair, Isle of Wight Festival, and many more. They are a frequent must-see on festival aficionados’ lists with the band’s reputation for tight and exuberant, yet wholesomely candid performances frequently filling tents to their sweaty capacities. Their debut album ‘This ’n’ That’ was released in May 2020 to critical acclaim and the band are currently writing, recording and releasing a constant stream of singles leading up to a compilation-style album towards the end of 2023 that will act as a snapshot of the current chapter of the Bare Jams saga.

Never ones to keep still, the band continues to delight old fans and recruiting new ones, playing to packed venues far and wide. Time and again, they bring a relentless energy enveloping a core moral message to both their live performances and recorded music. Bare Jams are serious worldly-wise optimists using their music as a panacea. Their mission: making records that inspire, inform and entertain; energising festival crowds and gig audiences and healing through melodies and lyrics. And surely the world needs some healing right now; Bare Jams are here to administer the cure.